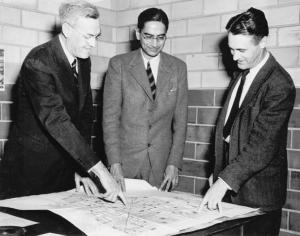 Initial work under the cooperative agreement with the USDA led to the development of the Master Sample of Agriculture, a national area sample of land which was subsequently utilized in numerous economic surveys of American agriculture. Research was also conducted that provided the foundation for area sampling methods and statistical estimation for sample surveys. The Master Sample of Agriculture initiated cooperation between the ISU Stat Lab and the USDA that continues to this day. The agreement with the Department of Agriculture resulted in a large increase in the staff of the Stat Lab. Arnold J. King, Floyd E. Davis, George D. Harrell, Glen D. Simpson, Roy A. Bair, Dale E. McCarty, and Robert J. Monroe were stationed at Ames as employees of the U. S. Department of Agriculture and as resident collaborators. Six new positions in the Laboratory at the staff level were created and the clerical and computing staffs were enlarged. In the fall of 1938, four graduate assistants, Earl Houseman, Paul Homeyer, Emil Jebe, and Raymond Jessen, were working on the cooperative agreement.Random sampling was not the accepted method in 1938 that it is today. One of the data collection procedures heavily used by the Department of Agriculture was the Rural Mail Carrier Survey. In this operation, rural postal carriers distributed questionnaires to the mailboxes of farmers. Those questionnaires returned by the farmers were processed to provide estimates of crop and livestock quantities. The USDA was seeking new, more efficient ways to collect and analyze information.

In the 1930s, the United States economy was struggling. For agriculture it was a time of physical and economic stress and a time of technological change. Both 1934 and 1936 had been marked by severe droughts and resulting dust storms in the Central Plains. Crop production was shifting from animal power to tractor power, and hybrid corn was being adopted. Because of the depressed economy, many government programs, including several farm programs, had been introduced under the so-called “New Deal.” The administration of these programs required accurate data. It was at this time of demand for data and awakening interest in random sampling that the Department of Agriculture and the Statistical Laboratory entered into their cooperative agreement.Consistent with these objectives, the Department of Agriculture and the Statistical Laboratory cooperated in research on experimental design (including plot shape and layout), time series, crop forecasting, and other statistical methodologies, as well as in the sampling investigations that are the expertise of CSSM. 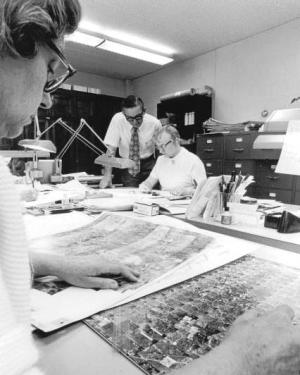 In the early 1950s the survey group in the Statistical Lab moved to new offices on campus, which allowed faculty and staff a central place for consulting and survey work. Survey research and consulting continued to grow through the groups efforts in many disciplines and areas. The early 1950s saw survey statistics research highlighted in PhD dissertations in other disciplines on campus, a practice which has grown significantly since. Other efforts in the 50s and 60s included survey research, methodology, and practice in areas such as employment trends in the state of Iowa, home economics studies across the nation, farm practice surveys, and surveys for researching social welfare in the state of Iowa, just to name a few. Interest from international venues also increased after the 1950s, as research fellows from across the globe began visiting the department to take courses in survey methodology and work with faculty and students on applied research projects. In 1956, the survey group began its cooperation with the US Soil Conservation Service (later the USDA Natural Resources Conservation Service) to develop survey methods and provide operational support for the National Resources Inventory, a longitudinal survey of agricultural and other natural resources on nonfederal lands. CSSM continues work on the NRI project today. Results from these surveys are used extensively in the construction of Farm Bills in the U.S. A second major, ongoing collaboration began in this period with the US Census Bureau on improving survey sampling and methodology in census practices.

While computation has played a role in statistical analysis since the 1940s, developments in computational science in the 60s, 70s, and 80s allowed for more sophisticated survey and data analysis. The survey group began working on designing and developing complex data storage and analysis systems in the 1970s. SUPERCARP, the first mainframe computer program developed by the Survey Section, was operational in 1976. In collaboration with the International Statistical Program Center of the US Census Bureau and the US Soil Conservation Service, SUPERCARP underwent major revisions and updating of algorithms in 1985 that allowed its deployment on IBM-PCs. The software was also expanded to allow for estimation and estimated standard errors for totals, rations, means, and proportions for subdivisions of a sampled population, and for the estimation of regression equations. One goal of the CARP software development project was to provide developing countries with software for local processing of survey data. Later, EV CARP was released as companion software for Wayne Fuller’s book, Measurement Error Models (1987).

Throughout the 1990s and into the first decade of the 21st century, survey statistics education and research continued to flourish at CSSM. The wide diversity of projects undertaken include survey consulting on projects such as local efforts to analyze and improve ISU campus services; consulting projects with state of Iowa departments and bureaus to develop statistical pictures and gather information about Iowa resident’s behaviors and preferences from energy use in homes to radio listening habits, to farm production surveys and Iowa business and economic survey research; ongoing, long term research projects with national agencies like the USDA/NCRS and the Census Bureau, as well as new projects with the National Cancer Institute, the Centers for Disease Control, the National Institutes of Health, and the National Science Foundation, among many others. In November 2002, due to the increased integration of research, education, and consulting practices, the Survey Section of the Stat Lab officially became the Center for Survey Statistics and Methodology.